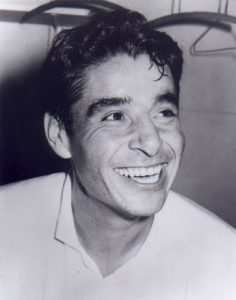 Born in Los Angeles to working-class Mexican immigrants, Richard “Pancho” Gonzalez was a self-taught tennis player who overcame many challenges, including racial discrimination, to become the best player in the world for a record 10 years. The first Hispanic-American superstar athlete, movie-star handsome Pancho was considered by some as the greatest and most charismatic tennis player of all-time.

As an 11-year-old, Pancho was the L.A. marbles champion. But he was most impressed by an African-American, “Armless” Willie, born without arms, who shot marbles with his feet. Willie’s courage left an indelible mark on Pancho.

When Pancho was 12, his mother bought him a department store racket and soon he was teaching himself to play at Exposition Park.  A natural athlete, within two years Pancho became the best player in his age group. An Anglo friend affectionately nicknamed him “Pancho,” slang for Mexicans and, like it or not for Richard, it stuck.

Although Pancho was a good student, he spent more time on the tennis court than in class. Ultimately, he was banned from junior tournaments due to truancy. Soon Pancho was in trouble with the law for curfew and spent a year in reform school for petty burglary.

After serving in the Navy, friends convinced Pancho to give tennis another try. Within two years, and shocking the tennis world, he won the 1948 United States National Championships. The country-club elite didn’t appreciate a Mexican kid from the streets being champion and labeled the win a fluke. Determined, the next year Pancho defended his crown with a five-set win over Wimbledon Champ Ted Schroeder. With a wife and child, and one more on the way, Pancho turned pro.

Although that first year he was beaten badly, through relentless practice, Pancho eventually became the World’s Professional Champion. He also discovered another love: auto racing. He held drag racing records and, with his brother Ralph driving, won numerous titles.

Amazingly, Pancho won tennis tournaments into his 40’s, continually beating the best players in the world, some half his age. But Pancho always regretted not finishing school and eventually received his GED at 57. With all the championships and honors in his remarkable Hall of Fame career, Pancho might have been proudest that he had encouraged youth to complete their education.

This above is a limited list of Pancho’s record as his career included so many significant
accomplishments.